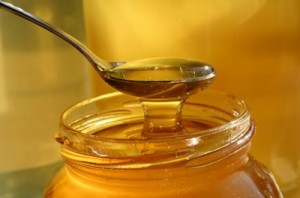 Corn has infiltrated so many of our standard foods nowadays. The problem is that not only is the majority of food now tainted in the GMO processes but many people nowadays have an allergy to corn. (I can’t help but think the two are related.) As such I wanted to share a recipe with you that’s an alternative to corn syrup so that you don’t have to do without some of the sweet luxuries that you enjoy. I use this syrup base almost exclusively in place of corn syrup. In fact, I’m using it tomorrow to make a divine Honey-Star Anise Marshmallow Mousse. Yum! 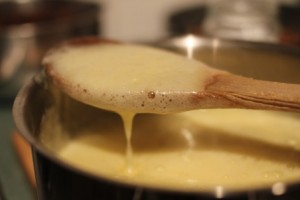 This does not store at room temperature as long as regular corn syrup, though; because it doesn’t have all of the other stabilizing junks in it. It doesn’t “go bad” per se, but it will crystallize over time and using the crystals for dishes that would normally call for a syrup just won’t turn out right. However, when I do get the crystals, I just keep them all in a separate jar and use it to make my Buttermilk Syrup or Maple Syrup recipe, in which case it’s just fine. 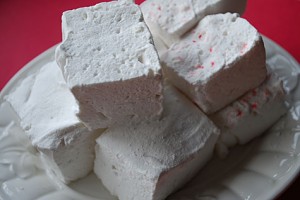 I've seen gourmet marshmallows make their way to a lot of the expos and trade shows I've attended lately. It's a GREAT way to make some prepping money with a LOT of profit margin build in!)  I like the coloring of this substitute better than regular corn syrup, too; as it’s nice and clear. Be sure you’ve got a reliable candy thermometer. I’d strongly suggest you get the kind that attaches to your pan. But if you really want to do it right, get the electronic kind that will audibly indicate when your temperature has been reached, in case you get distracted—you know, like when you’re teaching a cooking class. *grin* 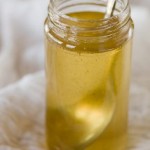 You’ll want to store it with a tight lid in a glass jar. This is one of those times though that you can make use of the non-Mason jars. (I don’t recommend using any non-canning jars for pressure canning or water bath canning because they do not always have suitable thickness and structure integrity to handle the heat and/or pressure.)

This takes about 30 minutes to make and you certainly don’t want to rush it. You’ll also have to tie your hands down to your sides so you’re not tempted to stir it at the wrong time. But other than that its really quite easy to make! 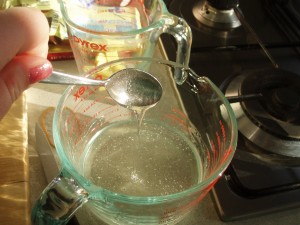 Place all ingredients in a HEAVY 4 quart pan. Stir gently with a heatproof spatula until the sugar is all moistened, then bring the mixture to a boil over medium-high heat and cover the pan for 2 minutes. You want to actually allow the steam to “wash” the sugar crystals from the side of the pan. Then uncover the pan and insert the candy thermometer and increase the heat to high. Once you remove the lid DO NOT STIR THE MIXTURE (otherwise it will crystallize when it cools.) Continue cooking until it reaches 240 degrees F. Remove from the heat and let the syrup cool for 15 minutes. Ladle it into a clean glass quart jar and attach the lid.

Recipe makes about 1 quart. It can successfully be doubled or tripled. You will need to select a saucepan that it as least triple your anticipated batch size to leave sufficient room for the boiling process. It will keep at room temperature in a closed glass jar for 6- 9 months. IF the syrup begins to form crystals at the bottom of the jar, simply pour out the amount of syrup you need WITHOUT SCRAPING THE JAR. Discard any crystallized portion that is left in the jar.

After storing, when ready to use you will need to warm it up a bit. You can do this by putting the jar in a pan of hot water over low heat until it can be poured easily or you can put it in the microwave for 2 minutes on high power. Fight the urge to stir the syrup. Do NOT stir the syrup.

Good information!
I picked up on your comment about corn right away and I think you may have solved a personal mystery. When I was a kid I ate a lot of corn with never a problem. As I got older I tolerated it less and less, it gives me stomach cramps so bad that I just don't even try to eat it anymore. I can eat cornbread and chips but not corn kernals. I wonder if the processing for cornmeal makes the difference or if it is just the GMOs that cause the problem with fresh ears or whole kernal corn? Might be worth some investigation.

Oh this one is yummy for sure. My Mom has made this to make a fluffy white icing that is so good on a chocolate cake she makes. I remember on cold winter days in Pittsburgh, she would whip this up and OMG! We, my little brother, Mom and I would eat near the whole cake by the end of the weekend. All from scratch and oh so good.

Okay, should we stir the syrup?? ;-) This is great - the kids have a favorite energy bar recipe they make for hiking, camping, etc. and it uses corn syrup... I have thought about trying agave in it because I worry about the corn syrup's roots, as it were. This is a great, certainly less expensive alternative! Thanks!!

:-) You can use honey instead of corn syrup in a lot of recipes too.

I agree, I think this is a great post, and I like the idea of a corn syrup substitute and am going to try this, but I think it is more sustainable and healthy just to use honey. I started keeping bees and was surprised to find out how easy it is. Thanks for posting this article.

I only use Sucanat which is granulated. Aside from making the syrup darker, do you think it would work alright? I suppose I should just do it and make something yummy with it this weekend to see for sure.

THANK YOU for the recipe!! My daughter is anaphylactic to corn and corn products. Usually I use honey or agave nectar in place of corn syrup, but honey is too sweet sometimes, and the agave nectar sometimes ferments...think of tequila as that is what it come from.

I think the GMO wheat has given me (and a lot of other people) a wheat allergy... cramping in the tummy. But now I will watch corn to make sure that is not doing it too. We are growing our own heirloom corn, so we will see how that goes. Thank you!

Hi Kellene
Thanks again for another great recipe. I too, have huge concerns over GMO food and would like to see more recipes like this.
Information on how to avoid them would be great too.
Thanks!