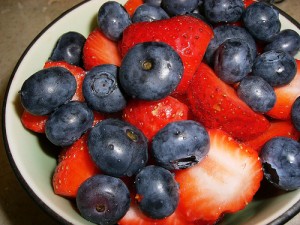 This week I purchased fresh strawberries at Wal-mart for $2.98 and fresh blueberries at Sunflower Market for .99 cents.  I sifted through them trying to find the best looking packages without too much weeping of the fruit and of course, without any mold. It was my intention to eat healthier and put them on a salad with salmon for several lunches this week. However, I only got to use them on the first day because by the second day of them being in my home, they began to turn horribly moldy. So I asked myself, why in the world was I so foolish, spending money on this kind of garbage produce when I can just use my freeze-dried berries with the same tasty result but without the hassle.  Since I don’t believe in just wasting money, and I also believe in holding people accountable, I will definitely be taking my berries back to their respective stores and have them replaced—can you say more hassle?  So, as if I needed to be reminded once again, I have decided "to heck" with the so-called fresh fruit in our grocery stores. I’m sticking to either homegrown or freeze-dried!

I got an e-mail several weeks ago from a rather panicked reader who was trying to calculate what she really paid for her freeze-dried peaches. She was concerned that she had made a big mistake and paid ten or even 20 times more for the freeze-dried peaches than she would have for canned or fresh.  While her financial calculations were based on a faulty foundation, even more important was the consideration of the value of reliable, healthy produce that can only be acquired via freeze-dried products. Permit me to highlight the virtues of freeze-dried for us all, so that we don’t end up with the same kind of hassle that’s so prevalent in our produce purchases as of late.

First of all, you’re not paying for any spoilage, bruising, or stems. When you purchase a freeze-dried berry for example, you’re paying for the whole berry and literally nothing but the berry. The only difference between that berry and a fresh one is the LACK of residual chemicals in the freeze-dried, and the lack of water. Simple soak your preferred fruit in cold water for a minute or two, and you can throw it on a salad, in muffin batter, pancake batter, smoothie, or frosting.  I pay particular attention to only buying whole pieces, not chopped up bits and pieces that some freeze-dried companies sell for cheap. As I’ve stated previously, I purchase a great deal of my fruit from Blue Chip Foods under the Augason Farms label. I get WHOLE pieces of fruit that is completely CLEAN. And so long as I purchase them only when they go on sale, I end up paying substantially LESS than I would for fresh produce. Paying less, but getting more peace of mind, a 20-30 year shelf-life, and no hassles returning garbage produce to the store; sounds like a GREAT deal to me! 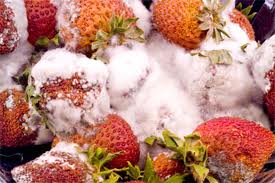 Keep in mind that the price you pay for freeze-dried produce is only a part of the whole value. You’d pay much more if you were to buy “organic” produce. Also keep in mind that the USDA allows over 20 different chemicals to be used on so-called organic farms and still permit the label “organic” to be used.  Whereas freeze-dried fruit HAS to be clean in order for the freeze-drying process to be performed correctly. Stems, twigs, leafs, etc. don’t freeze-dry well and they stick out like a sore thumb. So it is very unlikely that you will pay for one iota of that sub-standard material in a quality freeze-dried product. Here I was trying to keep a “fresh” produce product in my refrigerator for only 5 days so that I could enjoy it, and yet I couldn’t keep it for even one day before being greeted by mold.  I think having the peace of mind of a couple decades of shelf-life is well worth any small amount of premium that I might pay for the freeze-dried product (although, like I said before, I really, really do take advantage of sales rather than paying full price on such items).

Where to find Freeze-Dried Products

Oh, speaking of which… For those of you who are in the Gilbert, Arizona area, you are to be envied this week! Starting today, the Southeast Gilbert Costco has brought in only 2 pallets of a freeze-dried fruit three-pack from Augason Farms. The three-pack consists of 3 #10 cans. One blueberry, one strawberry, and one raspberry. I don’t know the exact price, but I do know that’s it’s definitely under $54 (Costco just doesn’t like to tell prices over the phone for some dumb reason. *sigh*). That’s a significant deal considering that the raspberries and blueberries alone are usually about $35 each! So if I were you, I’d definitely be making a trip over there asap before they sell out of the 2 pallets. I do know that this is a special engagement only.

For those of you who are Utah based, Macey’s is having a phenomenal sale on these items this week. In fact, Augason Farms just released a new package size for several soups. They are now available in a 14 ounce size. This makes about ½ gallon of soup total and I have to tell you, they are DELISH! Macey’s is selling them for only “2 for $5” this week. The new chicken noodle is one of my new favorites because the noodles are more like the homemade noodles instead of the anemic ones you usually see in a freeze-dried form. I think this size is awesome for those of you who want to try something out before paying for a #10 can of it.  I know that several of the Macey’s are giving out free bowls of soup from 11:00 a.m. – 2:00 p.m. tomorrow, September 11th. Call your local Macey’s and see if they are participating in this program today. If not, they probably will be doing so on the 18th of September!

Oh, and one more thing. Augason Farms just came out with their own variety of hot cocoa. I have to tell you, I tried the candy cane one last night and it was DIVINE! Better yet it was less expensive than the Stephen’s Hot Cocoa which I usually get. And did I mention that I’ve got a great recipe to make fudge from a powdered hot cocoa mix? Yum!

For those of you who rely on the mail to get most of your products like these, be sure to check out Augason Farms’ website www.augasonfarms.com and scroll down to the bottom for their “Deal of the Day” and their featured monthly “Hot Buy.” They have really started getting on the ball a bit more lately with running these kinds of specials so that everyone can benefit who loves their products, not just the locals. 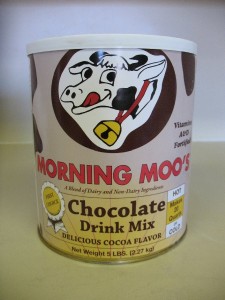 If you’re in Alaska, great news for you too! I know that you’re paying $7-$8 bucks for your milk nowadays. Well, there are two of the Wal-Marts up there that are now carrying the Augason Farms milk. I love both of the milks they create and your costs will go down dramatically if you purchase your milk this way…approximately $1.50 per gallon! Plus, it’s got none of the chemicals, all of the nutrients, and for some reason folks who have been lactose intolerant in the past are able to enjoy this particular milk.

Ok. Back to the freeze-dried thing. Bottom line, I’m converted all over again. Taking 2 minutes to reconstitute the fruit for a salad is a heck of a lot better than paying more for the produce and then having to travel BACK to the store to return mold! Wouldn’t you agree?

I have to agree with you. I just had the same thing happen....mold and soft fruit. Ok, now on to dehydrating.....hmmm.. corn not up to pare,spent 4 days doing corn,celery,bell peppers mushrooms..... Thought about my time. The cost of eletricity and gas...etc. Well it is just not worth it. Freeze dried is a long term full of vitamins food. Dehydrated is not! The best part the tast is there, yum. I have gotten into making all of my food stuff from laundry detergent to what ever. When it comes to vegitables and fruits....I buy freeze .. dried! I use it all the time now. I live so far out of town it pays for me to buy on the internet, most of the good company's give free shipping over $100. I am now trying out a lot of main menue items from these co. They are great about samples....

I quit buying fruit at Walmart. Every time I buy their fruit - it only lasts one day. The last time I bought Pears and had to return them in the morning because they turned completely brown. The Walmart by me were overcharging on their fruit and produce by having scales that were over. I noticed two small onions cost me over $3.00 on my receipt. I weighed them on my postal scale at home and they weren't even a pound. I went back to the store and the Customer Service clerk weighed them on a different register that did not match my weight on them. I had her try another register and that was different too. I went home and called the Deptartment of Weights and Measures to calibrate their scales. They told me that for each scale weighing wrong, Walmart would be fined.

Take twenty strawberries and pit or slice them

Then dip strawberries in mixture and eat

I have a question I've been wondering about. I've seen people dehydrate frozen fruits and vegetables in their own dehydrators and then seal them in bags or in bottles. Will they also last about 25 years?

Thanks so much for your wonderful informative newsletter!

It all depends on how much humidity there is. If you can keep the cool and DRY, then yes, they will last for a very long time. Keep in mind, long shelf-life of foods is ideal, but you don't want anything that you don't use and rotate in your supplies.