It seems everyone is joking about zombies these days. Having avoided horror movies most of our lives, we must admit we're still not exactly sure what zombies are. We are not worried about preparing for something that doesn't seem like reality though. What we do worry about is not having what we need to take care of our family in a basic disaster type of situation. Disasters are a reality.

We began preparing a lit 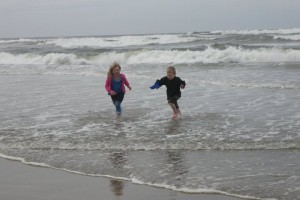 tle over a year ago. The Japan earthquake shook many of us around the world to the core. We were struck with worry for the people of Japan and the more than 20,000 who were swept away. Beyond all of the destruction, loss, broken families, unprepared shelters and radiation, there was also a bit of fear for ourselves. You see, our family lives directly in the path of the tsunami that was created by that earthquake. We lived a real life tsunami drill that morning. We did not know what magnitude of evil would be coming across the ocean that day. In fact, we were not even aware of it for some time, we were sleeping. Some family members that live six hours away, were up in the early morning hours watching the news. They called to wake us. Were we ready for that fateful day? Not really. Lucky for us the tsunami was much smaller than expected, but still, people on our West coast also died. And so it began. We started storing away extra water, food, cooking supplies, hygiene items, medicines, tools, batteries and more.  We began our journey on how to be more prepared and educated for whatever may come our way. These extra preparations have proven extremely beneficial.

Recently, we experienced a March snowstorm, which is unusual for our coastal area. We left a sitter 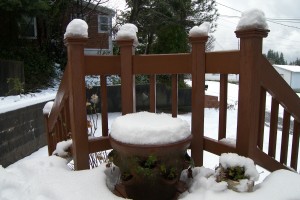 with our children and went to our destination just a mile or so from our house. A couple hours later, we realized it had been snowing and accumulating rapidly. We heard major roads were closed due to accidents and downed trees. It was tough to get back to our own home that night.  Walking was about the only reliable and safe method of transportation. Cars were stranded and abandoned in the middle of the streets. We realized it would be impossible to get the sitter back to her home and our sitter stayed the night that evening. Were we prepared for the storm? We had personal care items stored and were able to give away new toothpaste and toothbrush, etc. Such small trivial items, but appreciated. We didn't need to run to the store since we had all we needed. Five days later, there were still houses without power and some without phones due to the storm.

There was another snowstorm in our area back in January. When the snow finally melted, it rained for days and there was a lot of flooding. There were several houses that were flooded and taking on water and people were stranded without power on the other side of flooded roads. The rain continued and the utility company asked residents not to use the tap water due to a storage issue with the water tanks. If the tap water was not rationed, there would not be enough clean water after just a few days. Were we prepared? Yes, with a solution as easy as walking to a different area in our house and grabbing a stored water container. Our water preparations allowed us peace of mind that week. We were not a burden on the city water supply or others, we were prepared to care for ourselves. 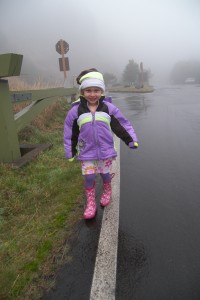 The main reason we prepare is to be able to take care of our family and others, however needed. There are many other important reasons. One is that we live in a rural area. We'd be the last to be able to get goods or help if all main roads were closed like they were during that March snowstorm. We prepare because we have life threatening dietary issues and intolerance. Many of the products we can use daily, are not available locally, so we stock up when we can. We also prepare because of the economy. Items are getting more expensive and we'd rather buy when they cost less. We buy a little here and there and store them away as futures. A job loss would not be quite so scary if we have some items we will be needing on hand already. Finally, we prepare simply because there is a chance that our preparations will survive an event and be useful.

Preparing for unknown events may, or may not be important to you. One cannot plan for every possible scenario, but there are certain things that could help in many situations. Would we go on a long hike without water and snacks, or a drive without gas in the tank and a spare tire? We feel it would be better to have something we may not end up using right away, than to have a great need for something basic and not have it. This year has held event after event for us and it has been proven repeatedly that our stowed away items are golden.  We prepare, because for us, it would be foolish to do nothing.

How to VOTE for the best Preppers Outreach Contest Entries:

This hit very close to home! I'm pretty sure you must also live in Lincoln County?
I have lived for 30-years in an oceanfront home on a sandune, every day the thought of a Tsunami crosses my mind. I have always prepped for a natural disaster and the last few years have ramped it up a lot to include a financial disaster.

Linda- Yes, we do! I can't imagine your constant worry living oceanfront. As far as we can tell on maps, we're just out of the tsunami zone. My husband works in the zone. We think about the "big" earthquake for our coast often too. Yay, a fellow Lincoln County prepper!

Great article with experienced wisdom. Thanks!

Thank you for your votes!

Wonderful and heartfelt essay that brought tears to my eyes, thank you for writing this.

I found your essay better than many others, so vote #2-!!

...and finally, number 5.
Thank you for writing this and good luck in your prepping adventure

I like that you mentioned accommodating dietary restrictions/allergies. This is often an oversight.

Awesome read! Thank you for bringing up some good points.

I agree that not enough people consider allergies and dietary restrictions. Many people also overlook pets.

I've lived on the coast most of my life and have a huge concern for tsunami preparation. Vote #3!

You mentioned the economy. We've been learning about how to raise and prepare small meat animals... in the city. We've also been planning our garden which is mostly potted. It seems like one can never learn enough and/or prepare enough wherever you live.

Thank you again for sharing and spreading the word about prepping!

You've got my votes!

Thank you for encouraging us to be more prepared.

We are going to work on water storage. We have none and I can see how it would be beneficial.

We also need to learn more about canning and food storage. Water first! Thanks again!

I appreciate all of you taking the time to read this and vote. Thank you for your comments! For those just beginning a prepping journey, I encourage you to just start. You don't have to start big. Start however you can and learn about different skills to help yourselves. Store away things you use, even just a few a week.

A big thank you to Kellene for this contest and all your time put in to run it! Thank you also to all of the companies for the amazing prizes. What fun! I found a few products I like that I didn't know existed before the contest.

I'll surely be going through the company prize items again and learning more about them to see what else I want to add to my "must buy" list. Keep on preppin on!