How to Deal With Electric Shocks/Electrocution --by Guest Contributor, Dan F. Sullivan

Although information about survival and preparedness is abundant these days, it’s extremely hard to find information about electrocution. Knowing what to do if you or anyone else gets electrocuted is of paramount importance particularly after a tornado or a hurricane, when the power lines are down.

My first “experiment” with electricity happened when I was 4. I stuck a pin inside an outlet because it seemed to me like it would fit in nicely… and almost fell of the chair I had climbed on (because of the shock and the 10 inch flame that missed my face by only a few inches). My mom was a feet away from me but she didn’t see me until it was too late to stop me. Luckily, I was fine but that was my first survival lesson that’s still fresh in my mind because of the shock it caused me.

Stories like these are not singular. An estimated 1,000 people die each year in the United States from electrocution (35 of which because of lightning) while ESFi reports that 7 children A DAY are treated in US hospitals after tampering with an outlet.

(The term electrocution, by the way, is used only when the person dies from the electric shock, although many people argue that the two mean the same thing.)

Now, by no means am I a doctor or an electrician but I do feel we need to spread the word on the dangers of the electrical injuries because it’s one of those unpredictable things that can kill us in an instant and everyone talks about. Accidents will happen and it doesn’t take a hurricane to get injured (or worse) from one. And, what’s worse is that if the amount of electricity is high enough, we die instantly. 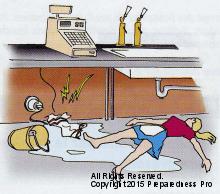 How Does One Get an Electric Injury?

This is trivial but still worth mentioning to refresh our memory and make sure we don’t forget something when we teach our kids:

Even though the human body is not a good conductor, electricity I always trying to “return” to earth using any means necessary.  Of course, this isn’t what actually happens when you come into contact with electrical current. We all know that the current is nothing more than electrons flowing in one direction, right? Well, when you get electrocuted, it’s the electrons that are already inside you that start moving. As a result, our muscles start contracting involuntarily (because they use electrical impulses to function) and heat is created because our body also acts as a resistor in a circuit. It is the extreme heat created that kills you, not the current itself. That’s why victims often have severe burns on their skin and that’s why they fry to death…

How Much Is Too Much?

Whether we feel a slight tingling or we’re thrown a few feet away due to muscular contractions, it all depends on the amount of electricity we’re exposed to and the path it chooses to go through or bodies. Typically, if the current comes through one hand and passes through the other, it’s going to pass right through the heart and affect its beating. (As you probably know, the heart beating is also “dictated” by electrical impulses.) Plus, if there’s water involved, the shock is that much more fatal.  There’s no surefire way to state how much current can kill someone but the effects of the current on the human body range from absolutely nothing to tingling, a small shock, involuntary muscle contractions, difficulty in breathing and severe burns.

Usually, if the current is less than 500 volts it won’t cause a significant amount of injury for an adult. Children, however, are susceptible to shock even when the voltage is lower than that. However, as a precautionary measure, it’s always good to go to the doctor and take tests. Even if you think you’re fine after a shock, that doesn’t mean your brain, your heart or your muscle are ok. This goes double for pregnant women.

What to Do When Someone’s Electrocuted?

If someone’s been electrocuted and you happen to be there, do not touch him or her! The very first thing you must do is break contact between that person and the current. Only then you can touch them (to give them first aid etc.). You can do this by either shutting off electricity at the mains or by using a non-conductive material such as a piece of wood or something made of plastic to push that person away from the current.

If you don’t have an item made of wood or plastic to do the job, you can use a t-shirt, a leather belt or a pair of pants. Do it like you would use a rope. Wrap the cloth or the belt around the body part that’s still connected to the source and move it away from it. Your skin and his should never be in close contact, even if there’s a layer of cotton between them.

At high enough voltages, electricity can travel through air. Stand close enough to the victim and you could quickly get into trouble if the current is strong enough.

After you’ve removed the electricity source, the only thing left to do is call 9-1-1 and tell them exactly what happened. If you can (and if it’s needed) you should give them CPR but only if you know what you’re doing. Otherwise, it’s best to wait for someone who does.

What if there’s no 9-1-1 to call? Well, as I said, I’m no doctor, but the right thing to do is to either put them in the recovery position and perform chest compressions fast and hard if they’re not breathing. Someone suggested that the songs “Stayin’ Alive” by the Bee Gees and “Another One Bites the Dust” by Queen have the right tempo to do this. Also, you probably don’t need to do mouth-to-mouth, just keep pumping. Mouth to mouth can also be risky as you never know what kind of disease that person has that he could pass on to you (particularly post-crisis scenario).

Another possible outcome is the person getting electrocuted may fall and break something, like I almost did back when I was 4. In this case, make sure you let them operator know about this when you call 9-1-1 and under no circumstance should you try and move them (again, unless you know what you’re doing).

If it’s up to you to fix the broken limb(s), don’t forget to treat any skin burns first by applying cold water or ice. The problem is that some of these burns can be deep so applying cold water or ice is a top priority as long as they’re breathing and conscious. Oil or any other type of ointment will NOT do at this stage, it must be something cold to cool that person off.

Also, keep in mind that short-circuits present a real risk of fire. The moment you have time, you should check the perimeter for flames and immediately take action.

How to Stay Way From Electric Current

As with everything, it’s better to prevent than to treat so taking the right precaution measures to avoid electric shocks and electrocutions is paramount.

Here are just a few of the things you should do right now in order to be prepared:

Other Things to Remember

Here are the main takeaways from this article:

Keep in mind that your pets, like your kids, are also likely to chew wire so make sure you make your home safe from such accidents to avoid a tragedy.

My first time was a mercury thermometer:)
If you have animals (you know) that chew on cords, tubes, etc.,
Use tobasco sauce all along the reachable length, it is nontoxic to
children and animals of all sizes and it is a surprize to them!
Glad to see you back in full swing...LL

Maybe just use that bitter apple stuff that you buy at pet stores so you don't end up with a kid who loves spicy things chewing on your wires?

@ Laurie: Excellent suggestion with the chewable items though I would suggest using chili powder (or similar) for electrical items due to the liquid nature of the tabasco sauce. -FU

Years ago, I was watering my front yard, & an electrical power cord that soneone had buried under about 6" of dirt in my yard, somehow "jumped up" & grabbed of my downturned hands. The groynd & I were soaking wet already. Of course you can't just "let go", but as I felt myself blacking out, my 5 yr. old came out of the house, & said, "Mommy, are you ok"! I was terrified that she'd run over to me, & be electrocuted also. I can't remember being able to speak, but she later told me that I'd said, "go into the house right now, & call your dad, but don't come off the porch, for any reason". Then I passed out. Somehow, as I was falling, I'd managed to contort my body, just enough so that when I went down & out, I fell out of the current's range. When I came to, & was finally able to get up, I began walking towards the house, when I saw streams of blood spurting out in front of me. The electricity had blown the ends off of three of my toes, two on one foot, & one in the other! I didnt think I needed medical treatment, but got a call from someone who convinced me to go to the ER. The Dr's were amazed that I'd even survived, let alone driven myself to the hospital. I was given infusions to counteract the overabundance of lactic acids, & kept on an electrocardiogram machine all night.
I recovered quickly, but could not touch anything electric, for several years. Even the vacuum felt like it was shocking my hands & arms.
I had a new power water pressure machine that I tried to use to clean off the deck, & it almost knocked my out. Will this ever go away conpletely?

Since electricity is a silent & sudden shocker or killer, more & morwe stress should be given in educating the common man, woman & child about its perils.

It would be a good idea to develop a nasty shock machine (that gives a feeling of shock) but does not harm anyone - to enable people to know about the feeling - since most people act only upon receiving the experience.