Hello all who have a desire to be prepared. I decided to take the day off from writing so that I can play Mrs. Claus. Ted Blanchard has generously offered his two cents on preparedness as a community for you all. While it may be a lengthier read than articles past, I picked up a few "Oh yeah, I've got to remember that" nuggets.

Not everything he states is quite how I would address it, but I figure I'd better give you a brief break from the Voice of The Preparedness Pro. Even the voices you love can still nag on you at times, right?

You're Not (Yet) Prepared 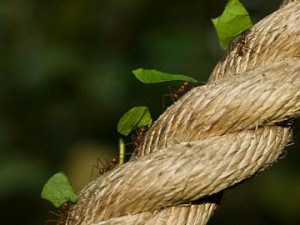 So you decided to be a hardworking ant.

You saw the warning signs years ago and decided to be the ant, not the grasshopper. Perhaps you found and purchased the home on land that is now your residence as well as your retreat.  You’ve gathered the materials to survive, perhaps even thrive, during the coming storms of political upheaval, food shortages, social disorder and economic distress.  You took courses on weapons use and feel confident in your ability to defend home and kin with any of the weapons in your personal armory.  You assembled canning materials and learned how to use them.  You consume, replenish and rotate those foods regularly, not just watch them age on the basement shelves.  You have the house wired for 12VDC as well as standard 120VAC.  Your solar panels, batteries and backup generator are all positioned and tested.  The neat stacks of silver rounds lie nestled in protective containers, waiting to be used for purchases when the dollar is finally recognized for the worthless paper it has become.  Medical supplies are all labeled and stored in easy to reach locations in the house, barn and bunker.  Manuals on survival techniques, emergency first aid, growing and preserving your own food, and a host of other critical topics are carefully filed away for future reference in an Internet-limited world.  Stabilized gasoline and treated diesel sit quietly in sturdy underground drums.  Your communications gear includes CB, Ham and FRS radios, and you rigged up wired field sets between the main house and outbuildings.

You even took some steps not normally included in the various “Preparation for Apocalypse” articles that flooded the media and which were read by millions.  You got part of a fresh animal carcass from the local country butcher and practiced your wound suturing skills on real flesh.  You picked up and squirreled away various strengths of reading glasses that you don’t need now but may need in years to come.  You gathered moderate quantities of several multi-use chemicals and a book that shows how to make simple mixtures such as match head material, flash powder, and smoke grenade filler.  When buying and storing your paper goods, you didn’t just lay up three years worth of TP, you also remembered that If The Momma Ain’t Happy, Ain’t Nobody Happy and, setting aside your embarrassment, you bought and carefully stored away a generous stash of feminine sanitary products.  You knew that having beans and rice for months at a time potentially could be considered a fate worse than starvation, so you added hard candy, plenty of dried fruit and other treats to the pantry.

You feel a sense of accomplishment and confidence as you fine-tune your checklists and provisions.  You can’t plan for absolutely everything, but you feel you’ve done all you can to get ready for the majority of scenarios that might come about. You are prepared.  Or are you? 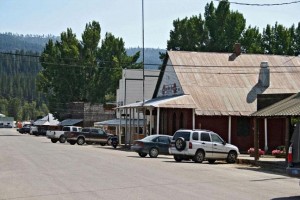 Are you prepared as a community?

A vital component that many people forget is preparation as a community. Self-sufficiency tends to lead to some amount of isolation. My own little slice of heaven in North Idaho is a prime example.  Almost every resident of my small rural town is independent, largely self-reliant, skilled, practiced and ready for everything from extreme weather to zombie attacks.  Each of us knows the neighbors who are in our immediate vicinity, and within that small area we all share goods as needed and assist when the situation calls for it.  But until very recently, no one but the Postmaster could say he actually knew the majority of people in our community beyond a wave and a hello as they drove past.

Each micro-community, composed of anywhere from three to a dozen families, had social interaction at backyard barbecues, fireworks displays and 4H meetings, and teamwork interaction at such events as road clearing sessions after a big windstorm or snowstorm.  But these individual micro-communities did not interact regularly, did not know what skills or provisions each could contribute in times of widespread emergency, and most importantly did not know whom to call to rapidly disseminate important, time critical information about events that could impact the entire region.  We had no phone tree, no list of skill sets available within the town, and no plans for assistance beyond what each micro-community did as a matter of practice, informally developed over the years.  We were NOT truly prepared, even though most of us thought we were.

While it is still an ongoing process of refinement, as all preparations tend to be, we took an approach that may well serve your own community – even if you live in a large city.  First, we advertised a local community preparedness meeting, with enough advance notice that people could get it on their calendar if interested, but not so far in advance that it was forgotten by the time it arrived.  The invitation, via signs at the Post Office and Fire Station, and distributed via flyers, had three key elements:

It was to be an informal meeting with no governmental spin or involvement; it was to get folks talking about community preparations for a variety of situations where we could help each other out effectively, while maintaining our privacy and independence, and finally it would include some refreshments. You’d be surprised how many people are drawn by the prospect of home made brownies, fresh coffee and Huckleberry lemonade.

The meeting itself stressed that the purpose was to:

Also mentioned up front was that the meeting was NOT called in order to:

We reminded attendees that planning was important now: 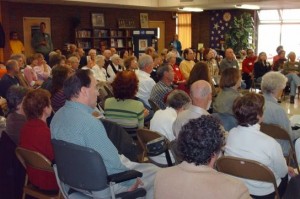 We talked about the various scenarios that might require the community to band together instead of trying to deal with the issue on our own, including wildfire, extreme weather, a major transportation interruption, a large scale natural (or man-made) disaster, economic meltdown or further acts of governmental intrusion.

We discussed the focal areas that might be established to get people with specific knowledge or skills involved on teams of resource planners/coordinators to allow the best response to the situation:

We asked attendees to sign up, voluntarily, for areas where they felt they could add benefit by thinking and researching, providing leadership or just helping out on a time available basis.

We established a website where residents can find out – at their convenience – about meetings of possible interest; tips from others on various topics such as food preservation, animal husbandry, and ammo reloading; updates to community contact lists; and other information that may be of value but does not warrant continual phone calls or E-mail messages.

We created a phone tree that allows any person to make as few as 3 calls and be confident that within 5-10 minutes the vast majority of residents had either been personally contacted or had a message left on their phone machine.  The mechanism is simple:

The close the loop step ensures that the community phone tree has been activated, at least partially, from top to bottom and allows cross-trunk communication if the line is severed unintentionally by personal or electronic difficulties.  A community of >1,000 people can be reached in just 5 vertical steps if each person makes just 4 phone calls without duplication; six steps if only 3 calls per person are made. For events requiring continued updates, such as wildfire location or direction of approaching zombies, the web site can then be used to stay up to date without tying up the phone lines again and again.  To ensure that the phone system itself does not cause a breakdown in communications, the community should have backup schemes as many layers deep as necessary, including CBs or other pre-established radio lines, “pony express” mechanisms using car, ATV, snowmobile, horse, dogsled or whatever makes sense in your region.  This one step alone can dramatically improve your overall preparedness as you will have 100s of trusted eyes and ears scanning for dangers, hundreds of hands and minds that may be applied to a situation that would overwhelm your own family’s abilities, and a means to call on resources beyond your own wealth – as long as the spirit of give and take is kept balanced and not abused.

Beyond these steps, you might also consider establishing an appropriate number of recurring activities or meetings, whether they are weekly or quarterly as prescribed by the level of availability and interest; fleshing out or refining your community preparedness plans based on detailed threat scenarios that seem likely for your area; establishing response plans, including identification of leaders and supporters; and holding community response drills to see what holes you’ve missed so they can be corrected before a real crisis comes along.  As a final thought for consideration, a hand-cranked 110 dB siren suitable for notifying all locals within a considerable distance that they need to get on “the community net” can be had very affordably on your favorite auction site…

NOW you can go clean your M1A again while gazing fondly at your stuffed pantry shelves, secure in the knowledge that you probably are about as ready as you’ll ever be.

Excellent points and well presented, thanks! I'm passing this along and will be incorporating into my planning. The list of prep steps is well thought out also. Would love to read more from you anytime.

I really enjoyed this article. Does Mr. Blanchard have a blog? I tried to find any reference to him using Google, without success.

Nope. No blog. But thanks for the feedback. We'll have him do more articles in the future.

Perfect! Thank you so much for this guest post.