Today I've got some great information to share with you regarding first aid training as a first responder--after all, we're ALL first responders--and situational awareness.

For those of you who aren't aware, typically the term "first responders" is referring to the rescue teams, EMTs or the firefighters or even law enforcement who arrive on the scene in which help is needed. Most often the term refers to those administering medical needs. The term "situational awareness" refers to a person's ability to be aware of what's going on around them.  I call it being "mentally engaged" though you may hear the oft cited military term "keep your head on a swivel" which means to always be looking around you, being aware of your surroundings.

Today, one of my friends on Facebook shared some wise words that he learned while attending a training conference relating to his profession. He's also former military and actively works on perfectly his level of preparedness. I found his remarks to be valuable and as such, with his permission, have opted to share them here with a little editing and a few interjections on my part.

In early September of 2016. I only got to sit in on one breakout session while I was there, but it was a really interesting one. The focus of the presentation was on CCAs or Complex Coordinated Attacks; in other words acts of terrorism designed to hit a given area with multiple attacks looking to incite maximum terror. The Paris and Mumbai attacks were discussed at length with many details not readily available to the general public. 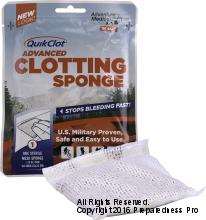 The first key take-away that I left with revolved around the many victims of these attacks who probably would have survived with prompt medical attention, but in many cases expired when they bled out. The presenter pointed out that because 1st responders were targeted by supplemental attacks when they responded to the initial attack, rescue and EMT efforts were hindered and greatly slowed. Also, due to the massive numbers of victims in a relatively small area, the 1st Responders and local hospitals were completely overwhelmed. What this means to me is that we all should have the knowledge, and the confidence in that knowledge, to treat wounds and stop the bleeding. To me this would mean more than the very basic 1st Aid provided along with CPR and AED training programs. (AED = Automated External Defribulator) (By the way, I carry a CPR mask on my key chain all the time.)  Additionally, this would mean having the means (mental and physical as well as supplies) to quickly stop massive blood loss, suggesting items like “Quick-Clot”, tourniquets, etc. Even common feminine hygiene items can make a significant impact on serious wounds* and help keep the victim alive long enough for professional 1st Responders or medical professionals to care for the victim. Bear in mind that YOU might be the victim in question, and there may not be anyone able to care for you until professional help can arrive, so you may have to treat your own wounds in order to have any chance at survival.

The other key take-away was that while there had been no (acknowledged) CCAs on US soil, other than Sep. 11 2001, it was merely a question of when, not if such attacks would take place here. Imagine my surprise when in the last 36 – 48 hours we have seen no less than 3 attacks in the USA (NJ, NY, and MN). One of which, a knife wielding attacker who injured at least a half dozen people while asking victims if they were Muslims before attacking them and calling out Muslim phrases, has reportedly been claimed by ISIS as one sponsored by them. The other two, both consisting of multiple IEDs (Improvised Explosive Devices), failed to cause the maximum number of intended few casualties as only a single bomb in each attack properly detonated. This caused area searches in both locales (one in NYC and the other in New Jersey) which located additional devices which bomb squads were able to neutralize with no additional casualties. So far there have been no arrests related to these 2 IED attacks and no ISIS claim to them as far as I know.

Obvious questions come to my mind at this point:

Here are some considerations that are going through my head at this time, might be things for you to consider as well:

I consider myself to be blessed with good to exceptional situational awareness. But I feel I have to improve upon that if I wish to continue to venture into areas that are preferred targets for those of the terrorist persuasion.

The nature of my job and my volunteer activities will continually expose me to potentially dangerous situations and environments, that’s just the nature of the business. It’s up to me to prepare myself to the best of my ability to be able to respond to whatever happens and to be equipped to deal with it.

The US has decided as of October 14 to require mandatory vaccinations for everyone in the US whether we like it or not. This needs to be addressed and prayed about.

Sorry, Betty, but I don't believe that's accurate. CA has passed that law, but even then there's still an exemption. The Federal Gov't most certainly has not passed such a law.

Excellent article. Most vehicles have a minimum first aid kit, but if we were to 'stumble' onto a massive CCA, it would hardly do any good. Makes me reassess my vehicle bag.

You are truly doing the Lord's work out here! I just came across your wonderful blog and thought I'd comment on your amazing efforts. I saw you on Doomsday Preppers on the National Geographic and it inspired me to be a better self-reliant Christian woman, wife, and mother. In the words of Sister Julie B.Beck "The work of salvation...includes improving our temporal and spiritual self-reliance." Go forward with faith God Warrior!!!

Do you have a list of "top items" you recommend people keeping in their car or bag to help the first responders?

The one item that almost all women have that can be used as a tourniquet is our bra. You can wrap it around most limbs and tie it at the ends. If it is a life or death situation, this would prove to be valuable.

I disagree. There are some bras that are good for this, but most would be awkward and ineffective due to the elasticity. Try it. You'll understand what I mean.