"Kellene, how do I know which manual grain mill to buy? I'm so confused?!"

There are THREE key considerations to choosing a grain mill that you'll be operating manually.  I'll provide you with these three highlights and let you choose for yourself from there, but I'll also share with you what I've chosen as a result.

1) Energy Expenditure: You want one that will require the least amount of physical energy per cup of flour you'll need to grind.  I have a lot of folks who've bought the cheapest things out there and when they actually go to use it, it takes forever to grind enough flour to make a bread recipe. Remember that your own physical FUEL is an IMPORTANT asset and resource for you, and thus taking measures now to protect and conserve the expenditure of that valuable fuel is something that you don't want to forget about taking care of in the midst of a survival or crisis scenario.

2) QUALITY: While it may sound a bit cliché, quality is going to make all the difference in the world when it comes to selecting this particular piece of equipment.  Yes, we all have a budget that’s a reality in our life, 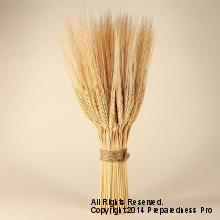 but when you're enduring a full-blown crisis scenario you certainly won't regret the “extra” money you may have spent on a reliable, quality piece of machinery.

Think about it. You find yourself in the midst of a power-down scenario that doesn’t have an end in sight.  You’ve got to make bread for your family, right?  Will that piece of equipment be something you can rely upon batch after batch after batch after batch of grain? (If you're contemplating just purchasing flour, please don't. The whole grain preserves the much needed nutrients, whereas flour loses most of its nutrients within 2 weeks. I can't think of a more important time to have vital nutrients than when you're trying to endure a crisis. But also remember that the best way to go into a crisis is with an already healthy, strong, and well-nourished body, so grinding your own grain now makes a lot of sense!)

Here’s something else to consider when choosing this quality piece of equipment. Selecting an exceptionally wonderful hand mill could be a lifesaver for you in ways other than the obvious. What if you have such a great piece of equipment that you can rely on using it more than just for your own family? Sure, you could merely help other people who might be in desperate need BUT, you could actually leverage your awesome piece of equipment for INCOME in the form of bartering for whatever you find yourself needing. You’d be surprised how vital ONE valuable service or product can easily be converted into a very secure lifestyle even in the midst of a harsh scenario that might come about in a crisis.

This notion of charging or bartering to grind someone’s grain into flour is not a new one. In the "olden days" each town would have the customary church, school, bank, saloon, blacksmith, and the livery etc. But you would also have a location where people could bring their grain that they grew, to be ground into flour. Sometimes the service would be found at the sawmill, sometimes at the mercantile, and sometimes it stood on its own.  But it was easier for folks to avoid using the rock on rock energy and much more realistic for people financially speaking than purchasing their own grinding equipment. Keep in mind, there are very, very few people who even know how to boil water, let alone prepare in such a way that they are actually thinking about needing something like a NON-ELECTRIC grain mill. And as they say “In the land of the blind, the one-eyed man is king.” So choose this piece of equipment wisely.  Ask for the opinion of people you know and trust AND WHO HAVE ACTUALLY USED THE EQUIPIMENT.  Also take time to look through some product reviews. Keep in mind that the NUMBER of positive reviews for a product should be considered rather than just the words that people use. (This is why I ended up purchasing a Nesco Gardenmaster for my dehydrator instead of an Excalibur food dehydrator—even though I was willing to spend the money.  There are 6 times more positive product reviews for the less expensive Nesco unit than the pricier Excalibur. That kind of equipment was going to be running for me most of the year and thus it was important that I selected the best quality for the best volume of produce for my money.)

3) Steel or Stone? The two primary choices for hand grinders will have either a steel grinding base or a stone one. I opted for the steel grinder. It lasts longer if it’s made of quality, thick steel, and it won’t wear down as much as stone will per use.  While one may feel more “environmentally friendly” or “holistic” using stone to grind their grains, I just couldn’t justify the expense that was nearly as expensive, and in some cases MORE expensive, for something that couldn’t handle as much heat and use as hard, thick, steel.

Now, I’m sure you’re going to want to know what I use.  Well first, let me say that for the electric version of a flour mill, I use the Nutrimill.  I can also use it with my Humless Sentinel Solar Powered Generator and thus that will save me some physical energy. However, I do believe in having back-ups to my back-ups and I do believe that a hand operated flour/grain mill is important.  Something else I wanted when I selected mine was that it would also need to perform flaking so that I could flake oat groats for oats (as oats tend to spoil too quickly for my liking) as well as beans (for tasty bean dishes such as refried beans and bean flour). So my decision ultimately ended up being the Family Grain Mill. (This equipment also comes with an attachment to the Kitchen-Aid or Bosch machines, if appropriate and you’re fortunate enough to have electricity.) The number of rotations needed for me to exert per cup of flour produced was much better than the more commonly purchased products out there, and the price was fair. I know there are a lot of folks who are interested in going with the really, really expensive units, such as the Country Living Grain Mill, but I just didn’t need to justify that.

While the Country Living Grain Mill has the availability of attachments so that you can use a bike to grind your grain, as well as a motorization kit, but I preferred something a little less “obvious” (think OPSEC); however if you are thinking in terms of using your mill for your own needs AND to potentially earn additional things you might need, that might be a good business investment in your future. But counter to what it may feel like when you’re cranking away, a bicycle does require more calories than hand-cranking an efficient piece of equipment. Furthermore, I'd have to purchase a 2nd Country Living Grain Mill in order to get the flaker feature that I have with the Family Grain Mill. (the Wonder Junior Deluxe Grain Mill also has a pulley adapter that would allow you to operate it from a moter, as well as a drill bit adapter that allows you to operate it from a drill, if you're 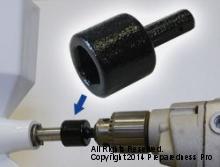 Another small consideration is that you won’t just be using it for wheat. You can use it for other grains and rice, and even seeds, etc.  So you may want to also consider that your chosen hand mill has the ability to adjust the size of your finished product

Regardless of which you choose, hopefully these guidelines for you to use in selecting a hand-operated grain grinder or an electric one will be beneficial to you.

Your link for the Family Grain Mill doesn’t seem to be working. I’m interested in looking at this product, if you could fix the link, please?

Hi! I was hoping your cookbook would be out for Christmas gifts this year. When will it be available? Thanks, Dale

You and me both, Dale. But unfortunately, real life had other plans for me as of late and I've been doing good to keep my head above water. I am working on it though. Thanks so much for your interest.

If you use the Wonder Junior Deluxe Grain Mill as we have, plan on using it manually. We bought and tried the drill adapter with not one but two heavy duty drills and they started to smoke. I would recommend setting up a permanent motor properly sized to run this mill and use it BEFORE you need to. This way you will be sure it will work WHEN you need it.

Thank you for sharing your info. I have been looking for a hand grain grinder for quite awhile. I was getting frustrated on which one to purchase. You helped me make up my mind. The Kitchen Aid attachment is quite a bonus. Thanks again.

Bosch has an attachment too and they have a hand adapter so that you can hand grind it in the event the electricity goes out. I have the Family Mill Grinder too.